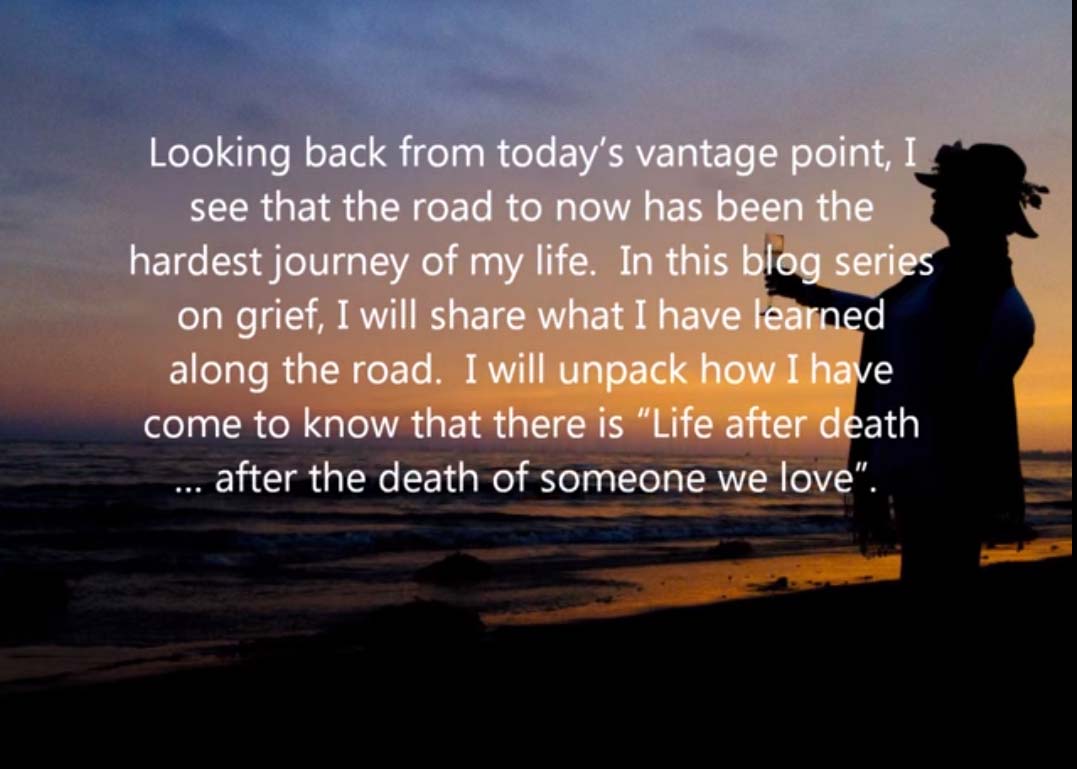 This is a reposting of an article originally published in 2014.

My late husband Roy died suddenly and unexpectedly on July  10, 2011.   I will soon be arriving at the three year anniversary of his death.  The journey of grief from that fateful day to today was filled  with terrible emotional pain, severe depression, unending despair, and unbearable mourning.  I would say that this first phase of my journey of grief lasted a full 12  months.  I had a housemate for most of the first year as living alone was too overwhelming for me.  She was a god-send in so many ways.

The second phase of the journey began one year after Roy died when I sold our home and moved into a new place not too far from where we lived in the foothills. I chose a smaller place on the ocean knowing I was creating a healing sanctuary for myself. The second year was hard in a different way. I was living in a familiar yet unfamiliar place. I was in a new home that I found and bought without Roy. I was living alone for the first time in 25 years. I felt like a fish out of water for most of the first year of living in my ocean side sanctuary. I scheduled my first trip 16 months after Roy’s death to participate in a 5 day workshop. It was being held in a place we had not visited together – Santa Fe. After this workshop, I became aware of subtle signs of hope, a gentle process of renewal, and a slow rebirth process unfolding. I soon was traveling to Arizona, around California, and onto Europe and Mexico.

As I approach the three year anniversary, I am fully creating a new life as a single woman. I have started dating and am enjoying it – there are some wonderful men out there.  The woman I am today is not the same woman who left her home on an early Sunday morning in July to drive from Santa Barbara to San Diego for an overnight meeting. I lost two people that day – my wonderful husband and friend, Roy, as well as the “me” who I knew at that time – a happily married woman in a successful 23 year marriage. She was married to her best friend and soul mate.

My last view of Roy was of him sitting at his desk, facing his computer, posting on his Facebook page, and wearing his tan and cream colored robe. At about 8:10 am that morning I told him that I was ready to leave for my overnight trip to San Diego. I entered his office, approached him from behind his chair, hugged him, and kissed his head. As I hugged him, I told him that I loved him and that I would call him when I arrived in San Diego. He responded that he loved me too and murmured “talk to you later, drive safely”. As I proceeded down the hallway towards the garage where my car was loaded with new CDs, water, and my luggage, I felt something in my gut telling me to yell back one last time “I love you dear, have a good day, drive safely wherever you go”. He yelled back “love ya dear”. Those were the last words he told me.

Arriving in San Diego roughly 3 ½ hours later, I called him from a Subway where my friend who I picked up on the way and I had stopped to get a bite to eat before our meeting. I was surprised that he did not answer either our home line or his cell phone. I tried him multiple times through out the afternoon while I was at my meeting. I wondered if f he had gone to a movie, had been called to a family emergency, or was napping. By 6:15 pm I knew something was terribly wrong. I told my friends I was very concerned and that I would call the security guards at the gated community we lived in. I headed towards my car and sat in the driver’s seat. My friend came with me and sat in the passenger seat and my car was surrounded by many friends as I awaited the news. The guards went to our home but there was no response. They called me with that info and I told them where the house key was hidden and gave them permission to enter our home. As I waited in my car for another call back from the guards, I was reviewing the past couple days in my head – Roy had not felt well, complained of nausea and fatigue. He told me he was feeling better the morning I was going to San Diego. I reflected that I would not have gone had I thought there was something wrong. Wouldn’t I have known if something was wrong? Why did I go? My cell phone rang and I was told that 911 was called and that I would hear back once the paramedics arrived. By this time I knew I would need to return home rather than spend the night as previously planned.

I remember being surrounded by women friends. I received the next call from my favorite guard Bill who told me the paramedics needed to talk to me. My stomach was in knots … I asked the paramedic “is my husband ok”.  His sentence began “I am so sorry Mrs. Mankovitz” … I began to scream “No, no, not Roy”. I was crying and screaming barely able to hear what I was being told. I was being told that Roy was dead on the floor of our bathroom. From visible signs it was a sudden heart attack and it been awhile since he died. The paramedic told me he would call the coroner’s office and that I would hear from them when they arrived at our home.

One does not forget the moment they learn that someone they treasure and love is dead. Frozen in time and space the eyes begin to retreat within … the scope of the physical world pulls in on itself and the future does not exist except in painful stabs of memory … he is not here, what will I do? In those initial moments of hearing the words that Roy was dead, my friends were asking what is wrong, what is going on, and I responded in agony that “Roy is dead”, “Roy is dead”. I am taken from the driver’s seat and placed in the passenger seat – my friend takes the wheel and we head back from where we began 12 hours earlier. During the drive, I begin the unbearable task of calling my stepchildren, sister-in-law, my family and our friends as my car weaves its way along the San Diego freeway. I reflect that the last time I was in the passenger seat of my car was 5 days earlier when Roy drove us to a 4th of July party.

Looking back from today’s vantage point, I see that the road to now has been the hardest journey of my life. In this blog series on grief, I will share what I have learned along the road. I will unpack how I have come to know that there is “Life after death … after the death of someone we love”.